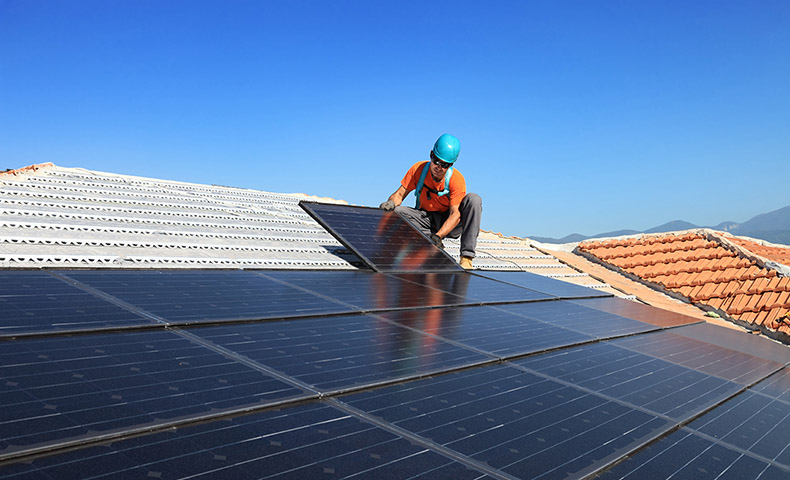 Sunshine splashing onto school rooftops and campuses across the country is an undertapped resource that could help shrink electricity bills, new research from Stanford University suggests.

The study, published in the April issue of the peer-reviewed journal Environmental Research Letters, shows taking advantage of all viable space for solar panels could allow schools to meet up to 75 percent of their electricity needs and reduce the education sector’s carbon footprint by as much as 28 percent.

At the same time, solar panels could help schools unplug from grids fed by natural gas and coal power plants that produce particulate matter, sulfur dioxide and nitrogen oxides – air pollutants that can contribute to smog and acid rain as well as serious health consequences including heart attacks and reduced lung function. “This is an action we can take that benefits the environment and human health in a real, meaningful way,” said Stanford behavioral scientist Gabrielle Wong-Parodi, an author of the study.

New solar projects may easily slip down the list of priorities in a time of widespread protests by teachers calling for increased school funding, smaller class sizes and higher wages. But the U.S. Department of Energy estimates K-12 school spend more than $6 billion per year on energy, and energy costs in many districts are second only to salaries. In the higher education sector, yearly energy costs add up to more than $14 billion.

The current paper suggests investments in the right solar projects – with the right incentives from states – could free up much-needed money in schools’ budgets. “Schools are paying for electricity anyway,” said Wong-Parodi, an assistant professor of Earth system science at Stanford’s School of Earth, Energy & Environmental Sciences (Stanford Earth). “This is a way, in some cases, that they can reduce their costs. If there’s a rebate or a subsidy, it can happen more quickly.”

Educational institutions account for approximately 11 percent of energy consumption by U.S. buildings and 4 percent of the nation’s carbon emissions. But while the potential for solar panels on homes and businesses has been widely studied, previous research has largely skipped over school buildings.

The new estimates are based on data for 132,592 schools, including more than 99,700 public and 25,700 private K-12 schools, as well as nearly 7,100 colleges and universities. The researchers began by estimating the rooftop area available for solar panels at each institution, the hourly electricity output given the amount of sunshine at the site and the hourly electricity demand of each institution.

Not surprisingly, the study finds three large, sunny states – Texas, California and Florida – have the greatest potential for generating electricity from solar panels on school rooftops, with nearly 90 percent of institutions having at least some roof space suitable for installations. Meanwhile, residents in midwestern states including Wisconsin and Ohio stand to see the biggest reductions in key air pollutants – and costs associated with addressing related health effects – if schools switch from the grid to solar power.

Beyond measurable effects on air pollution and electricity bills, solar installations can also provide new learning opportunities for students. Some schools are already using data from their on-site solar energy systems to help students grapple with fractions, for example, or see firsthand how shifting panel angles can affect power production. “It takes this abstract idea of renewables as something that can reduce greenhouse gas emissions and brings it home,” Wong-Parodi said.

According to the study, it’s not economically viable for educational institutions to purchase rooftop solar systems outright in any state. Rather, the projects can make financial sense for schools if they contract a company to install, own and operate the system and sell electricity to the school at a set rate.

Nationwide, the researchers project benefits stemming from an all-out push for solar installations on school buildings could be worth as much as $4 billion per year, if each ton of carbon released to the air is assumed to cost society $40 and the value of a statistical human life – in the way that regulators and economists calculate it – is pegged at $10 million. The estimated benefits capture the cost of premature deaths and other health impacts linked to air pollution from power plants.

The group’s estimates do not account for environmental and health impacts tied to international mining and transport of raw materials, or to manufacturing and disposal of solar panels. Such a holistic view, they write, “may yield quite different results.”

Zeroing in on likely impacts within the United States, the researchers conclude that nearly all states could reap value from school solar projects far greater than the amount they’re spending on subsidies and rebates. The study shows that’s true even when factoring in typical costs for installation, maintenance, operation and routine hardware replacements.

“There is an argument for increasing the level of incentives to increase adoption of solar panels by the educational sector,” said study author Inês Azevedo, who co-directs Carnegie Mellon University’s Center for Climate and Energy Decision Making and will be joining Stanford Earth’s faculty in July 2019.

California and New York, however, are exceptions. In those two states, the researchers concluded that currently available rebates exceed the financial, health, environmental and climate change benefits provided to society by rooftop solar systems on schools – at least at today’s prices for offsetting carbon emissions through other means.

“California and New York are doing a fantastic job of incentivizing solar, but we still don’t see 100 percent penetration,” Wong-Parodi said. “A good use of their time and resources may be to evaluate all the schools that don’t have it yet, and try to understand why.”