Across the globe, over 11 million people worked in renewable energy in 2018, an increase of 700,000 jobs from 2017. China, the US and the European Union have the greatest concentration in renewable jobs, while Asian countries are emerging as exporters of solar PV panels.

According to the report, solar PV jobs made up a full third of the sector’s workforce, with Asia hosting over 3 million jobs, 9/10 of the global total. Latin America also saw an increase in regional PV demand.

Here’s a closer look at the breakdown of renewable energy jobs worldwide for 2018. 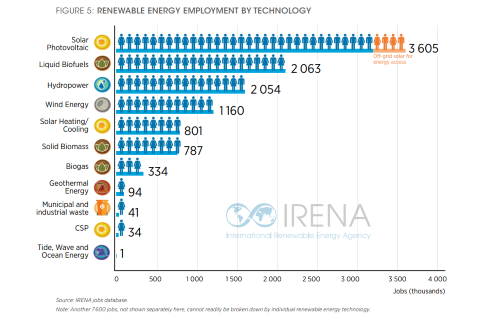 Leading the way in renewable energy jobs is solar PV, with 3.61 million people employed in 2018. While employment numbers fell in China, Japan, Europe and the US, India, Southeast Asia and Brazil saw increases. 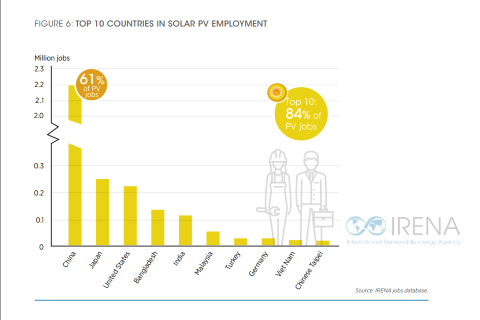 Manufacturing capacity has shifted to Asia, with 92% and 85% of global and module capacities, respectively. The US, India and Europe rely heavily on solar imports.

Globally, 94 gigawatts of solar capacity was installed in 2018, with China, India, US, and Japan the most important installation markets.

Rising adoption of off-grid solar is growing the number of jobs in previously isolated communities, like Africa.

The United states has 242,000 solar jobs in 2018, second only to biofuels with 311,000 jobs. Two-thirds of the solar jobs are installation and project development (mostly residential), with manufacturing accouting for 14%.

IRENA found that liquid biofuel jobs increased 6%, with Brazil as the largest employer with 832,000 jobs. Liquid biofuels include ethanol and biodiesel produced from plant materials, vegetable oils and animal fats.

According to IRENA, over 70% of hydro jobs were operations and maintenance, with construction and installation making up 23%. The International Energy Agency lists hydropower as the world’s biggest renewable energy source, with over 1,200 gigawatts installed capacity.

In fourth is wind, with China, Germany and the US taking the lead and making up 44% of the over 1.1 million jobs in wind energy.

Asia has the highest number of solar heating/cooling jobs with 711,000 people employed. The US is next with 12,100 workers. 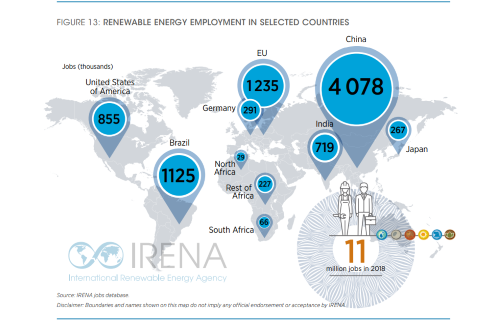 With the growth of renewable energy, solar panel cost is at an all-time low - see how much you can save today with the HahaSmart Price Checker.

Get Solar Incentives to save even more.