Why don’t solar installer fill the whole roof with panels? 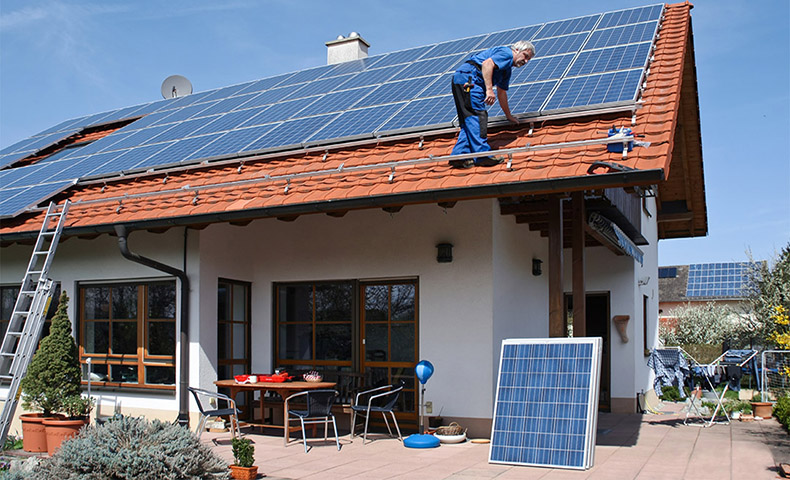 Why Won't Your Solar Installer Fill the Entire Roof With Solar Panels?

If you drive through any neighborhood with homes being powered by solar energy system, you’ll notice that the amount of panels changes from one to the other. Some have fewer; others more.

Yet, there’s a constant in all of them: the photovoltaic (PV) modules never fill the entire roof.

But why don’t solar companies simply fill every space with solar panels to maximize your solar energy output, thus allowing you to sell more power to your utility and reducing the amount of time it takes in electricity savings to cover the price of solar panels.

Even if you had the money to cover the pricing of solar panels for such a large array, there are other reasons why it wouldn’t be feasible. Let’s take a look at some of them.

Kenny Alves, who started a solar company, notes in an Internet message board that each state has its own regulations for solar power and they all impose limits as to the size of the array.

Energy developer Matthew Tripoli adds that “some states that administer programs that incentivize solar only allow systems to be installed that offset 100% (or some other %) of expected consumption in a given year… This prevents the system from being oversized or perhaps filling the entire roof."

Capacity amounts can also vary with regard to utility type, customer type, technology and system type. The Conference explains that states also have adopted capacity limits based on customer demographics. For instance, West Virginia established different limits for commercial, industrial and residential customers, which are then based on the size of the utility serving the various customer demographics.

There’s also the issue of shade, which limits solar panel's energy production considerably. Efficiency can drop to anywhere from 10-25%. And if the array is connected with a string inverter and one or more panels are under heavy shade, the rest of the modules will produce as much as the worst performing one. Unless the entire roof is completely free of shade, you’d be wasting money by buying more panels.

Martin Voelker, chair of a chapter of the Colorado Renewable Energy Society, also explains that more panels would mean more inverters. “sing the full roof can lead to a situation where you’d have to install two inverters even though number two only services a third of its capacity. So you’re paying for two inverters but barely using the second.”

Inverters are the second most expensive part of a domestic solar power system, and homeowners may not have the money to cover such expense.

Even if you decide to go with microinverters instead of a string inverter, you’d have to buy one for each panel, and the cost would go up dramatically.

In addition, for your PV modules to generate electricity they should be facing the sun. In the Northern Hemisphere, the sun is due south at noon and therefore, to get the most sunshine during the day and the maximum energy output from your panels, they should face the south. It’s the reverse in the Southern Hemisphere.
If you place panels in areas of the roof that face in other directions, they simply won’t get enough power to warrant the investment.

Fifty or 70 years ago, home builders were not thinking that people would be getting their electricity from solar panels on their roofs. Thus, most older buildings weren’t designed to withstand the additional weight of large numbers of solar panels.

Building codes also restrict where you may place the solar panels. Many cities have what are called “setback” requirements from the roof edges to provide access to firefighters.

There’s also the issue of the electric grid itself. The size of the transformer feeding the building can limit the size of the array. Upgrading the transformer can be extremely costly and utility companies will not welcome the need to update their equipment so you can plaster your roof with solar panels.